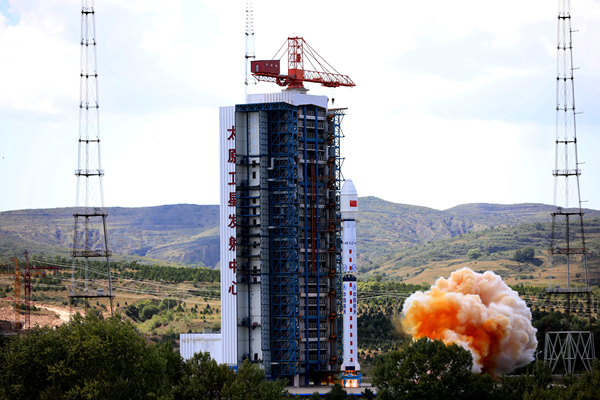 The satellite, Gaofen 11 02, is sent into orbit by a Long March 4B rocket from the Taiyuan Satellite Launch Center in northern Shanxi province at 1:57 pm, Sept 7, 2020. [Photo by Zheng Taotao/chinadaily.com.cn]

The Gaofen 11-02, the second in the Gaofen 11 fleet, was lifted atop a Long March 4B carrier rocket from the Taiyuan Satellite Launch Center in North China's Shanxi province, according to a statement by the State-owned space contractor China Aerospace Science and Technology Corp.

The satellite, developed and built by the company's China Academy of Space Technology, is tasked with providing images and data to a wide range of operations, such as land surveying, urban construction planning, agricultural forecasting and disaster prevention and relief. It also will provide information support to the Belt and Road Initiative and China's national defense, the statement said.

The launch marked the 345th flight of the Long March rocket family and the third mission of the Long March 4 series, which will fulfill a busy schedule of launch operations before the end of this year, the Shanghai Academy of Spaceflight Technology said. 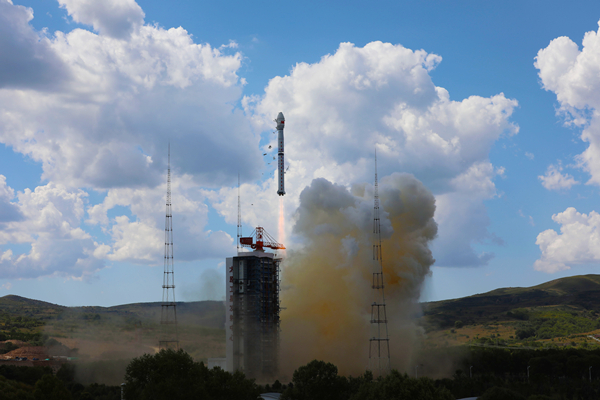 The satellite, Gaofen 11 02, is sent into orbit by a Long March 4B rocket from the Taiyuan Satellite Launch Center in northern Shanxi province at 1:57 pm, Sept 7, 2020. [Photo by Zheng Taotao/chinadaily.com.cn]

In another development, China Aerospace Science and Industry Corp, another State-owned space conglomerate, has announced recently that it intends to deploy 12 Xingyun 2-series satellites in 2021 to join the first two such spacecraft already in orbit, and then establish a small system for a trial run.

The Xingyun 2-01 and Xingyun 2-02 were lifted atop a Kuaizhou 1A carrier rocket at the Jiuquan Satellite Launch Center in northwestern China in May and are operating in a sun-synchronous orbit about 560 kilometers above Earth.

The two satellites are tasked with verifying technologies such as laser-enabled intersatellite communication and data transfer between satellites and the ground-based Internet of Things.

In CASIC's plan, the Xingyun network will have about 80 low-orbiting, narrowband communications satellites upon its completion around 2023 and will provide global coverage to users by that time.

Once the network becomes fully operational, it will offer users round-the-clock access to the Internet of Things, which is defined as a network of almost all physical items, bringing numerous advantages to users ranging from better control of their devices and higher operational efficiency to optimized utilization of resources, according to the company.