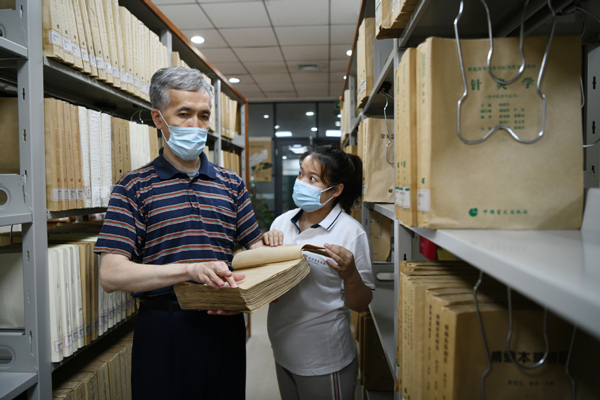 Wu Dongbing (left), who is visually impaired, reads a Braille book with the help of a librarian at the Shanxi Library in Taiyuan, Shanxi province, on Aug 6. [Photo by Kou Ning for China Daily]

Apart from offering Braille books, the Shanxi Library in Taiyuan, Shanxi province, is trying its best to satisfy the needs of the visually impaired by reading books aloud and playing movies accompanied by real-time narration.

Ren Xiangshu, a librarian in the reading room for the visually impaired, regularly serves as a movie narrator while "showing" films. Ren said the audiences enjoy the process very much because her vivid narration triggers their imagination.

The library, the largest public one in the province, founded the first reading zone for the visually impaired in Shanxi around 2005, and upgraded it to the reading room, where Ren works, after it was relocated to its current site in 2013.

Improvements of its facilities and its capacity to provide more tailor-made services mean the library can do more to help physically challenged people enjoy reading, said Wang Jianjun, curator of the library.

It is hoped that the reading room, with the colorful activities it hosts, can become a window to the world for its intended occupants.

The interior design of the room fully caters to the readers' needs. For instance, all corners of the desks and chairs are coated by soft, foamed plastic.

"I started borrowing books from the library in 2009. Now, the library is already an inalienable part of my life," said Zhao Tongjin, a patron who has congenital cataracts and poor vision in his right eye.

"I am now reading The Classic of Poetry, one of the oldest collections of poetry in the world dating back to the Western Zhou Dynasty (c.11th century-771 BC)," said Zhao, 64.

"The library purchased a set of Encyclopedia on Chinese History. I spent two years reading it. I wanted to buy a set of General History of China, but it was expensive, so the library helped me realize my dream."

Since it is not convenient for visually impaired people to go out, the library started book delivery services in 2005. It takes one call to have Braille or audio books delivered to their doorsteps, said Ren.

Wu Dongbing, 53, is another regular of the library who lost his vision gradually due to an eye disease when he was 40.

"I like reading very much. It used to worry me a lot because I thought I could not read any more," Wu said.

Then he started learning Braille and soon made many friends in the library circle.

"After that, I regained the loss that I felt in my heart. Now the library is like my spiritual home," he said.

Currently, the library has nearly 5,000 Braille books and periodicals, over 600 audio books, about 800 movies for the visually impaired and 700 audio players.

The library also organizes librarians and volunteers to regularly read for the "readers" and organize some outdoor exercise activities.

"I hope the activities will not only illuminate their world but also warm up the whole world," said Zhao Xujiong, deputy curator of the library.

Guo Hongji, a teacher at Shanxi Secondary Technical School for Special Education who lost his sight because of congenital glaucoma, said he enjoys them.

"The singing and entertainment activities the library organized in local parks for us are all memorable experiences," said Guo, 57.

Frequent visitor Zhao Tongjin echoed that the library has done all it can to help these patrons and that it feels like a home to them.

The library has also organized promotional activities for digital reading and computer training to help readers learn about new technology.

Regular patron Wu, for example, learned how to use his smartphone to access news, internet classes and social media.

"It is the librarians who ushered me into the new era," he said.

A solid understanding of the patrons is key, said Ren, the reading room librarian.

"It takes more than a kind heart to serve them," Ren said. "We must really know their needs. They are longing to be seen, heard and loved."

As such, the library also holds talent shows for the special readers to gain confidence.

During the COVID-19 pandemic, the library maintained contacts with these readers. It also organized lectures for them and showed movies on the internet, according to Ren.

Su Bo, 48, who lost his sight because of illness, is also a fan of the library.

"At first, I was desperate as I had no idea how to spend the rest of my life," said Su. Later, he built up his confidence through writing and learning music.

Four years ago, when Su took a walk in nearby Fenhe Park with his guide dog, he came across some of the librarians who invited him to experience the reading room.

Since then, Su visits the library almost every week. He said he has happily made many visually impaired friends whose thirst for knowledge and arts has inspired him to try his best to make life meaningful.

Su said the library is like a platform for people like him to meet. In this way, it's more like a knowledge and inspirational club for them, he added.

Wang Jianjun, the curator, said:"The library offers public cultural services. No one, particularly the physically challenged, should be omitted for that purpose."